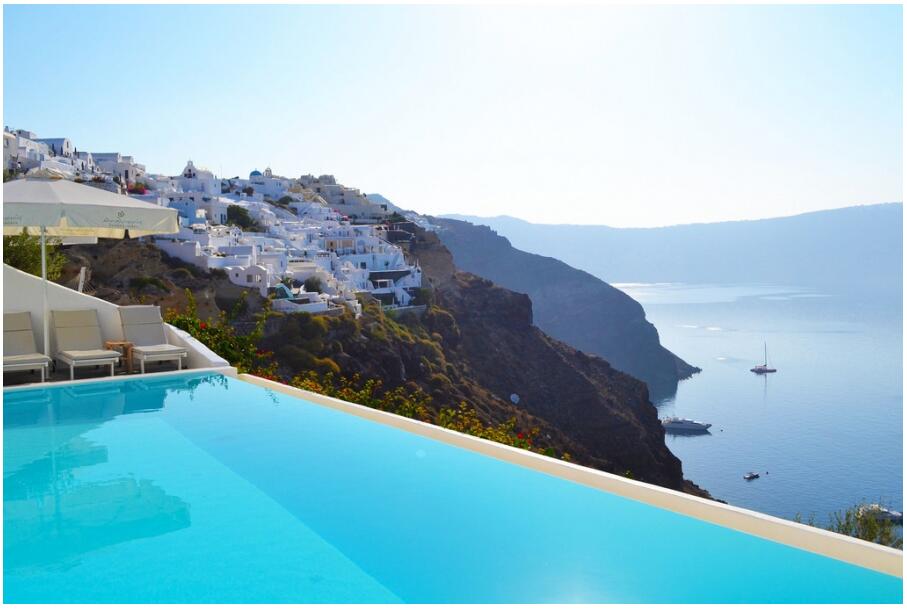 The picturesque island of Santorini is part of the small Greek archipelago in the southern Aegean Sea. It is also known under the name Santorini, which is derived from the Italian Santa Irene. Beaches with black and red sand and the striking rock relief are still reminiscent of their formation from volcanic lava and the consequences of the severe volcanic eruption many years ago.

Santorini has a few particularly charming cities such as Oia. A city on cliffs, which in addition to a breathtaking view with a postcard character, offers many other interesting places. The archaeological site in ancient Thera takes its visitors on a historical journey through time and for romantics Santorini has the spectacular sunset in store.

In the following we present you the most exciting tours, most beautiful attractions and best sights on Santorini. 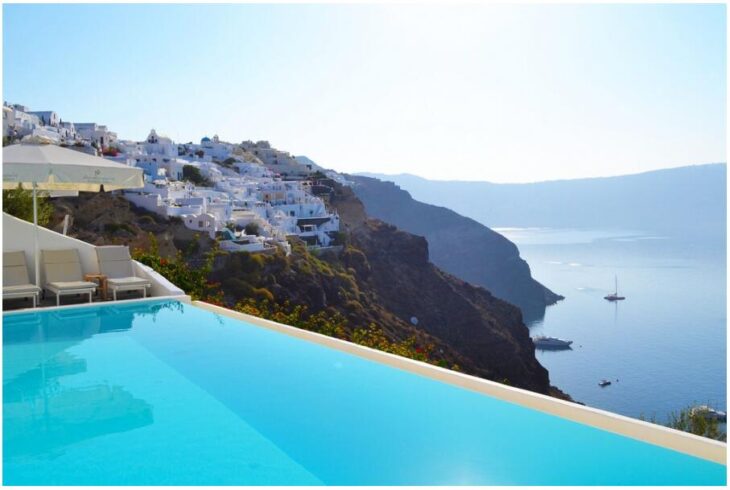 The city itself is a sight in itself. The fantastic play of colors from lush green palm trees, snow-white buildings with the typical blue roofs and the black crater rim make it a visual highlight. The landmark, the cathedral, can be seen from all over the city.

After the earthquake in 1956, it was rebuilt directly on Kratergasse and is a real magnet for visitors. From the outside, the Cathedral of Saint John the Baptist with its colored bell tower is an imposing sight. Elaborately beautiful wall paintings adorn their interior.

The ancient city of Thera lies on a promontory in the east of Santorini. It is assumed that the first settlement took place before the 9th century. Discovered remains from the 6th and 7th centuries indicate this. The church of Agios Stephanos is located directly at the entrance to the excavation site on the Mesavouno ridge. It was built from the remains of a princely basilica.

The scene building and the orchestra of the Theater of the Ptolemies are still clearly recognizable today. Other ruins such as the temple of Dionysus or the garrison’s gymnasium provide an insight into the life of the settlement in the past. The buildings made from the limestone of the mountain create a striking contrast to the usual Santorini.

Anyone who has ever seen catalog photos, documentaries or postcards from Santorini has definitely come across the town of Oía in the north of the island. The old seafaring village has long since risen to become one of the most famous sights of Santorini and inspires with Cycladic architecture and lots of charm – even if it can get very crowded on some days.

But it’s not just the snow-white flat roof houses with blue doors and shutters that have made Oia so famous. Deliveries of goods through the narrow, winding streets are still climbed by mule today. It gets hectic every evening at sunset in Oía – the atmosphere is breathtakingly beautiful! The best spots are waiting in the west of the village, e.g. at the old Lontza Kastel.

4. Caldera, the basin of the volcano

For Santorini connoisseurs, the caldera is something very special. However, many people cannot imagine anything specific under this term. In short, this name stands for the cauldron of the former volcano. Millennia ago eruptions caused the western edge of the volcano to sink into the sea.

What is impressive, however, is the fact that the arched port of Santorini is actually a volcanic crater that has filled with water. A hike along the caldera is definitely one of the most beautiful sights on Santorini. The most popular route runs from Fira via Firostefani and Imerovigli to Oiá.

When it comes to sights on the island of Santorini, Red Beach is a must. The end of the narrow access road at the church of Agios Nikolaos Mavrorachidi is also the beginning of an impressive natural beauty. The white church shines in front of huge, dark red volcanic rocks.

A small path uphill takes you to a plateau that offers a view of Red Beach and its bay. Here the deep blue sea meets the dark red wall of lava. Fine red and black sand creates a play of colors that is particularly impressive when swimming from the water. 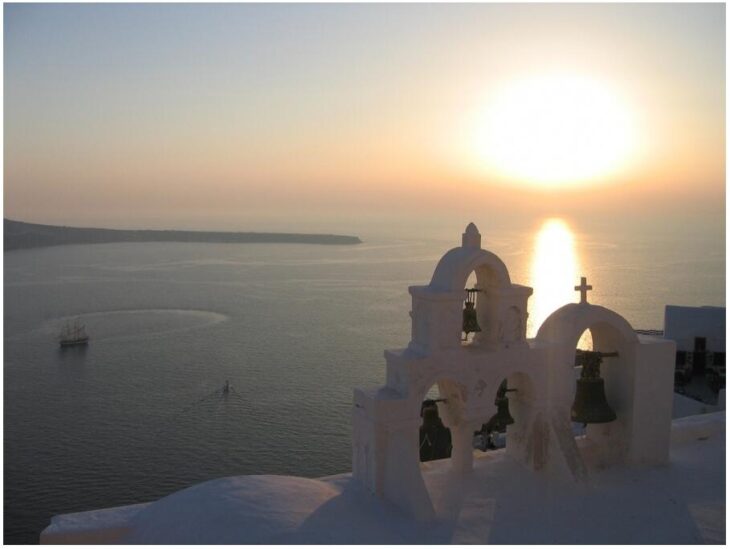 In 2001 the government declared Nea Kaméni, an island directly in front of Thira, a national nature and geological park. A visit to the rather barren volcanic island is offered by numerous organizers and takes place with excursion boats. Combinations of Nea Kaméni with the neighboring islands of Paléa Kaméni and Thirasia are popular.

The short hike to the summit, the Georgios dome, is particularly worthwhile on Kaméni. Here you can see not only two volcanic craters on the island, but in good weather you can also marvel at the crater rim of Santorini’s main island Thira with the towns of Imerovigli, Firostefani and Fira.

The former episcopal church Panagia Episkopi was donated by Emperor Alexios I according to a traditional inscription. The structure stands on the highest point of Santorini about 600 meters southeast of Mesa Gonia. Red tiles but also simple plaster adorn the roofs of the cross-domed church. The cross arm with altar has a semicircular apse with a coupled triplet window.

There are various rooms of different sizes in the interior thanks to extensions. Various icon stands are lined up on the walls of the interiors. The church has been a listed building since 1962. Every year there is a celebration on August 15th. The “Dormition of Our Most Holy Master, the Theotokos” is celebrated.

The place Emporio in the southern interior of the island of Santorini dates from the medieval era. The Venetian Castle of Goulas was an extremely important fortress for Emporio during the Venetian period. The way to their remains, which can be admired by vacationers, leads through small, contemplative streets.

In general, an extensive exploration tour away from the castle is also worthwhile. The old part impresses with its unique architecture and really traditional Greek flair. Emporio with its castle is one of the sights on Santorini that you shouldn’t miss.

More than 1500 hectares of the island are used for wine growing. Santorini is famous for its excellent wines. A variety of wineries are available for visitors to tour and taste. The Boutari winery is one of the most visited. It is located near Red Beach.

Our favorites, however, are the very modern Vassaltis Vineyards, which serve great wines as well as delicious delicacies, and Artemis Karamolegos Winery in the village. The latter usually does not offer its own tours, but as an individual day visitor you are always a welcome guest. It’s worth it!

In the outer southwest of Santorini, the small town of Akrotiri awaits visitors who want to explore something special apart from the classic sights. Trees bent by storms point the way to the small lighthouse Faros at Cape Akrotiri on the last stretch of the road.

High above the Aegean Sea, around the 110 meter high tower, there are quiet and idyllic spots with wonderful views. The view extends over the crater to the north to Oia. Incoming cruise ships result in impressive photo opportunities and the sunset is particularly romantic due to the seclusion. 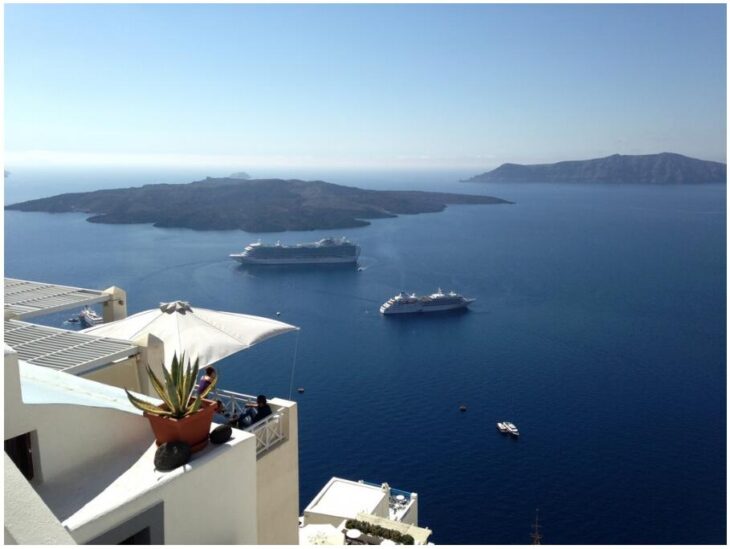 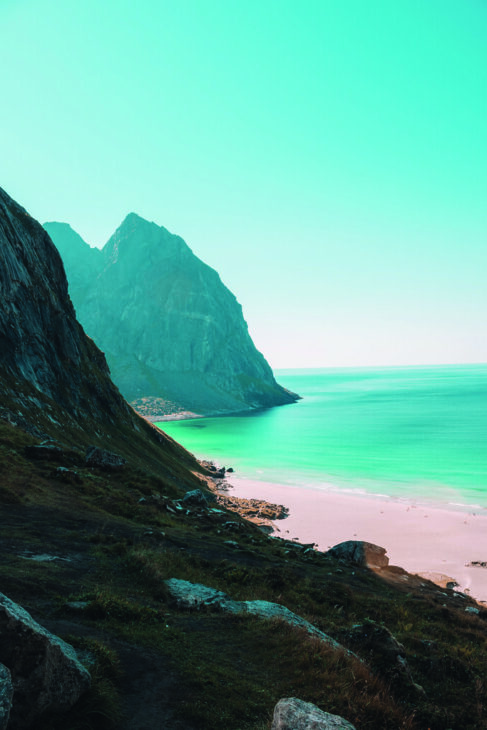